“Breast cancer” is a type of cancer mostly developed in women.  It is life threaten disease which is growing all part of the world.  Its incidence rates are varies from country to country or developed countries to un-developed countries depending on the public awareness, healthcare infrastructure, governments screening and preventive policies.  In the Asia Pacific region, Australia having the highest breast cancer incidence rate 86 per 100,000 general women population whereas with 65.9, 65.7, 61.2, 52.1 and 51.5 incidence rates Taiwan, Singapore, Hong Kong, South Korea and Japan is holding the 2nd , 3rd, 4th, 5th and 6th places respectively in the region. Worldwide breast cancer incidence rate was 43.3 per 100,000 women. 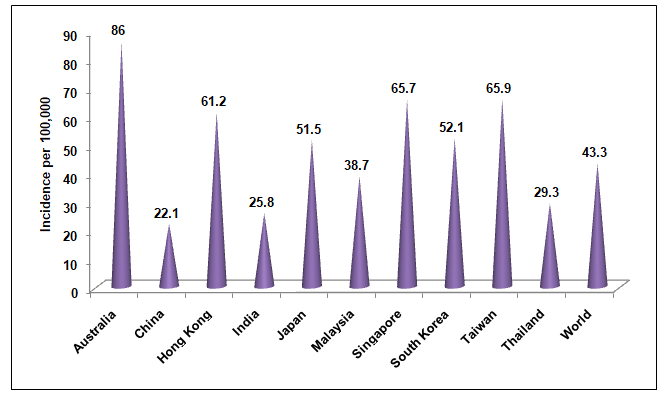 In 1991, Australian government has established BreastScreen Australia to provide free, population wide mammography screening every two years to women aged 50-69. The upper age limit was extended to 74 years in 2015. The breast cancer screening participants are stable between 54 percent and 58 percent in past couples of years.
Awareness
Breast cancer awareness in Australia is steadily growing due to government supports and national and international NGOs efforts. According to a survey conducted in 2014, 91 percent of respondents said that breast cancer can be successfully treated whereas 97 percent believes that early detection of breast cancer can mean less invasive treatment and better quality of life.

Do You Realy want to delete all items from you CART?